HOME > BLOG > Curves in Architecture and Why They Make Us Happy 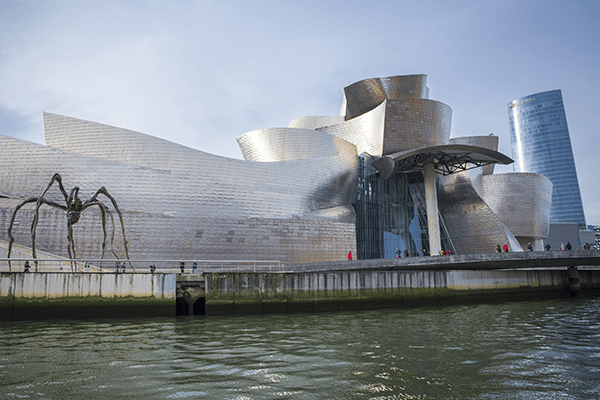 Curves in Architecture and Why They Make Us Happy

Waves lapping at the shore, plants winding towards the sun, rolling hills, the fruit we eat, the campfires we sit at, and a mother’s open arms. It’s only natural, curves have made humans feel safe and happy for thousands of years.

Companies have capitalized on the inherent appeal of curves. Apple built an empire by providing an inviting and user-friendly alternative to the straight-laced Microsoft Windows. From the rounded edges of a MacBook to the rounded corners of apps on the iPhone – Apple has created a consistent and natural brand, with products and interfaces easy to pick up and use.

Sharp edges, on the other hand, are sort of unnatural. There aren’t many things that occur in nature that appear completely straight. And if they do, our ancestors probably spent thousands of years running from them – the sharp teeth of predators, the pointed edges of weapons, or dangerous terrain.

It makes sense. We humans are sort of soft, squishy, and round ourselves. Pointed edges pose a threat to our existence – something that we learn from a young age as our parents discourage us from running towards coffee tables and hand us stuffed animals and plush basketballs, instead.

These natural instincts, to favor curved and round environments over environments with sharp edges or straight lines have been confirmed in several scientific studies.

During a study conducted in 2013, a team of researchers led by Oshin Vartanian at the University of Toronto presented participants with photographs of interior spaces that varied in contour.

Each photograph showed a living space with either curved architecture or rectilinear architecture. Curved ceilings, walls, and furniture versus straight-edged, while controlling for open and enclosed spaces and ceiling height.

The researchers also discovered that when participants were contemplating beauty, curvilinear contour activated a region of the brain responsive to the reward properties and emotional salience of objects – meaning curved environments evoked an emotional response from the participants.

The basis for Oshin Vartanian and his team’s study was that urban dwellers spend 90% of their time indoors and that the physical features of our environment influence how we live and act.

They wanted to bridge the gap between architecture and psychology – and the first variable they examined was the effect of curved environments. The researchers’ reasoning was two-fold. Historically, architects place major importance on the contour of a building and because a number of previous studies had demonstrated the positive effects of contour on emotions and that humans tend to have a natural preference toward curvilinear shapes versus rectilinear.

While there are likely exceptions to this rule (would Vartanian consider a room full of snakes curvilinear? Cause we’re going to select “exit” on that one) it’s safe to say, in general, humans prefer a curvy environment and if given a choice between something curvy and something straight – they’ll gravitate towards the curvy choice.

There is a famous story of architect Phillip Johnson, one of the biggest names in modern architecture, visiting the just-finished Guggenheim Museum Bilbao in Spain in 1998. When he entered the building’s atrium alongside the building’s architect, Frank Gehry, he began to cry, saying, “Architecture is not about words. It’s about tears.”

He later went on to call the art museum, “The greatest building of our time.”

The Guggenheim Museum Bilbao looks like a revolt against straight lines.

An explosion of shimmering silver and waves, there are very few buildings on Earth that resemble it. Vanity Fair described it as a “gargantuan bouquet of writhing silver fish”, and that organic, curved shape is where architect Frank Gehry drew his inspiration from.

“I was looking for a way to deal with the humanizing qualities of decoration without doing it,” Frank Gehry told Vanity Fair. “I got angry with it—all the historical stuff, the pastiche. I said to myself, If you have to go backward, why not go back 300 million years before man, to fish?”

That pursuit of an organic or humanizing feeling led Gehry to a natural place, which of course led to a rounded, curvy shape. As we learned from the University of Toronto study, it’s the type of shape more likely to evoke an emotional response, such as bringing a lifelong architect to tears.

The Guggenheim isn’t the only modern building that has an affinity for curves. We mentioned Apple incorporating curves into their branding and design earlier but they’ve taken it to another level with the design of their Apple Park – their brand new circular headquarters, which opened in 2017.

Interestingly enough, this building also derives its inspiration from Mother Nature. Steve Jobs wanted the HQ to be “80% landscaping” when he proposed the building to the Cupertino City Council. Apple also released a statement declaring, “The thoughtful and extensive landscaping will recall Cupertino’s pre-agricultural and agricultural past.”

Steve Jobs also made a point to call out the curviness of the building, Jobs was quoted in Fortune Magazine, “It’s got a gorgeous courtyard in the middle, and a lot more. It’s a circle, so it’s curved all the way round. This is not the cheapest way to build something. Every pane of glass in the main building will be curved. We have a shot at building the best office building in the world. I really do think that architecture students will come here to see it.”

Take a look at the stadiums making up the venues for the World Cup in 2022– buildings built for thousands of people to gather and celebrate. You’ll see a series of curvy, inviting buildings – despite the fact they house square fields.

John Lautner, a prominent architect of the 20th century, once said “the purpose of architecture is to improve human life.” If curves make us happy then it’s only right to incorporate them into our architecture – where we spend most of our modern lives.

If you’re convinced that curves make people happier, buildings a little more interesting, and design feel more organic – Kerfkore offers flexible architectural panels that make it easy to incorporate more curves into your designs. Check out our blog, Types of Curves, to learn more about the types of curves found in architecture and how to create them.